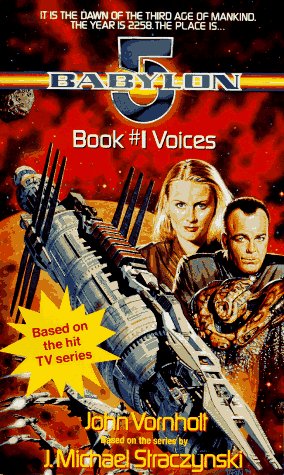 Setting: Early 2259, between "Points of Departure" and "A Race Through Dark Places."

Talia is caught up in a deadly conspiracy to assassinate hundreds of top Psi Corps officers.

Telepaths to the left of them. Telepaths to the right of them. And danger is all around Commander Susan Ivanova and Security Chief Michael Garibaldi when a Psi Corps convention is held on Babylon 5. Someone will turn this meeting of mind readers into a real blast ... as a bomb makes Babylon 5 a death trap.

The prime suspect is resident telepath Talia Winters. With Talia's old foes, thought-cops Bester and Gray, calling for her head, Ivanova and Garibaldi can't openly help her. Now she's running for her life through a perilous universe, and her psychic talent is her only weapon when her path is blocked by staggering intergalactic horrors: psi cops closing in ... and a killer waiting.

Harriman Gray ("Eyes") arrives on Mars for a meeting with Mr. Bester ("Mind War," "Eyes," and "A Race Through Dark Places") to help choose a location for a telepaths' conference. Bester suggests that he is strongly considering Gray as his new aide (recall Kelsey's ignominious end in "Mind War") and that this is a test of sorts for him, even though Gray is not a Psi Cop.

As Gray arrives on Mars and hands his identicard to the Earthforce personnel, he feels his mind being scanned and sees Bester step out of the shadows. Gray is staggered by the sudden scan, but he knows Bester has special latitude to conduct operations, including scanning people without their permission. (Also mentioned in "A Race Through Dark Places.")

As the two ride a monorail to the hotel chosen for the conference, an explosion rips the building to shreds. Bester rescues the shuttle from the explosion's intense heat by activating a manual mode; he later tells Gray he felt 26 people die in the blast. Getting back to business, Gray suggests Babylon 5 as an alternate site for the conference -- mainly due to his desire to see Commander Susan Ivanova again. Bester agrees, saying he will make sure Sheridan can't refuse.

Senator Hidoshi convinces Sheridan to allow the conference to be held on Babylon 5; the Captain ignores the opinions of Garibaldi and Ivanova, who think the conference is bad news. He orders Ivanova to remain in her quarters except when on duty to prevent incidents.

Meanwhile, Kosh is up to his old game of hiring Talia Winters for bizarre assignments (cf. "Deathwalker.") She clearly is frustrated by the assignments, but also has started to come to understand some of his terminology such as "Hour of Scampering." This time Kosh asks her to scan an empty chair next to him for "Invisible Isabel," as he calls her. To her surprise, Talia hears a voice there momentarily. Kosh also understands French, based on a brief exchange of pleasantries after the scan is concluded.

Gray contacts Ivanova as soon as possible upon landing; when Bester tries to scan Gray, Ivanova stands up to Bester. They talk more and at least agree to be on a first name basis -- in private. Nothing more comes of a personal relationship between them in this book; however, Ivanova's opinion of him is clearly softened.

Talia and Garibaldi make preparations for the conference and as the delegates arrive, things get interesting. Talia meets Arthur Malten, head of the Mix, the association of commercial telepaths. Malten's assistant Emily Crane is peculiar for her shyness. Talia convinces Garibaldi to give the three of them a tour of various parts of the station, including Down Below. Garibaldi has arranged with Na'Toth, aide to Ambassador G'Kar, to give the group a little scare which he hopes will help keep the other delegates to the conference out of Down Below. (Their telepathic attacks don't work on non-humans.)

Malten begins taking a serious interest in Talia, and eventually convinces her to attend the conference on behalf of the Mix. Crane seems jealous but provides a data crystal with information about budgets inside Psi Corps and the split of money between Psi Cops, the military telepaths and the Mix. She also later takes back the crystal, claiming she needs to put more information on it.

Meanwhile, Deuce, (cf. "Grail") arrives back on Babylon 5 with a special item in hand. During the first day of the conference, Talia and Malten are to attend the budget meeting, which includes Bester. Crane returns the data crystal to Talia after carrying it through a security search. Talia proceeds to the meeting and sits next to Bester.

During the meeting, Talia develops a headache and walks out. As she leaves, a bomb detonates in the conference room; it takes a serious chunk out of Bester, but doesn't kill him. Talia is immediately detained and awakens in her quarters with Ivanova alongside. After a short exchange, she decides she would rather be tried on Babylon 5 than on Earth, and asks Ivanova to be her lawyer. Ivanova agrees -- at least until someone better can be found. Talia is taken to the brig, and Garibaldi starts to search for clues and information to clear her name.

Ambassador Kosh pays Talia a visit in the brig, and they have a bizarre conversation which she thinks means he will break her out of the cell in about 20 minutes. Using the telekinetic powers she received in "Mind War," she opens the lock to the internal door and then finds Kosh has returned and knocked out the guards with a gas.

Talia dons a Minbari robe and proceeds with Kosh to the docking bays, where he tells her to enter a cargo container. When she tries to open the box after launch, she realizes that she is not alone in the container and that her traveling companion is Deuce, also escaping the station. Against his better judgment and with many threats to kill her, Deuce decides to help Talia. When they arrive on Earth, he helps her get a false identicard from a tribe of hi-tech would-be Indians who live in the desert.

Gray and Garibaldi are assigned to search for Talia and quickly board the first Earth-bound shuttle in search of Crane, whom they have come to believe has vital information on the bombing. (The Mix's headquarters is on Earth.) Bester has Talia declared a rogue telepath, and her image begins to be plastered on television sets around Earth. Gray and Garibaldi also learn that the Military telepaths expected something bad to happen to Bester.

Deuce's desert hideout becomes unsafe as shuttles begin to scour overhead looking for Talia. At his friends' strong request, he and Talia depart. The two play possum to get a Psi Cop shuttle to land, and capture the two Psi Cops. Talia convinces Deuce not to kill the Psi Cops, and they steal the craft.

Deuce agrees to give Talia a one-carat diamond and drop her off out of the way so he can proceed on his own way. They part ways in Phoenix. Talia sells the diamond, using the money to get to Boston and eventually to Mars.

Meanwhile, Gray and Garibaldi have been busy in Boston, paying a visit to Crane at Mix Headquarters. Although she is extremely unhelpful during the meeting, Garibaldi notices a confidential Senate memo on a self-destructing transparency on her desk. Through an old friend of Gray's they track down the contents of the memo. They discover that Psi Corps blackmails and bribes government officials, making lots of enemies. The bill would completely privatize the corps, taking it out of the military, which no longer controls it anyway. The Mix would take over control of Psi Corps.

Garibaldi tries to make another attempt to talk to Crane and ends up captured. Gray and Bester come to the rescue but are forced to kill Crane and some telepathic accomplices on the street. Bester tries to wind the whole thing up but refuses to acknowledge Talia's innocence. Gray finally finds a voice and stands up to him, resulting in Bester agreeing to leave them in Miami.Bester also warns them off Mars, where he believes Malten is located presently.

All paths begin to converge here as Garibaldi, Gray and Talia end up on the same shuttle to Mars by coincidence. Garibaldi recognizes her from her buttocks, causing Gray to vow that he will pay more attention to women's posteriors in the future. They decide to wait until after landing to make contact.

After landing, Talia's Uncle Ted contacts her through a telepath (it may have been Ted himself) and assures her that all is safe as an explosion rips the terminal building (actually it is just a smoke bomb to cause a distraction.) Garibaldi and Uncle Ted eventually recognize each other and he and Gray agree to follow Talia and Uncle Ted. The two of them convince Talia and Uncle Ted that discrediting Malten is of prime importance to clear Talia's name and discredit the false Mars terrorist group Malten has created.

Bester arrives after Gray contacts him. He meets Garibaldi and Gray with a shuttle, and explains that his true fear is that people will think Psi Corps can't protect itself from attacks from within. He still refuses to budge on the issue of Talia Winters.

Garibaldi offers to visit the bunker where they have located Malten; after receiving assurances from Bester that he won't be abandoned, he goes down to investigate. Bester enters as well once they position with the hatch. Inside, Malten is strapped to a chair wired with bombs and a note saying, "Compliments of the real revolutionaries." They have to abandon him after receiving a message that they have only 30 seconds to get out.

After the explosion and a narrow escape, Bester informs Garibaldi that he is still going after Talia and Uncle Ted. Garibaldi pulls a file that Ambassador Mollari made of Psi Cops gambling with him. When Bester tries to scan Garibaldi, Gray inserts himself and promises to protect Garibaldi from the scan. Bester relents and radios in a report clearing Talia Winters and restoring her to her position within the Corps.

Gray asks Garibaldi to tell Susan that he did something brave and worthwhile, and the two go their separate ways. The story ends with Talia visiting her family for a while before returning "home" to Babylon 5.